Directed by Sonny Laguna and Tommy Wiklund
Written by S. Craig Zahler
Based on characters created by Charles Band and Kenneth J. Hall

I have fond memories of Charles Band and David Schmoeller’s 1989 cult classic PUPPET MASTER, so I was excited when I heard that PUPPET MASTER: THE LITTLEST REICH was rebooting the franchise. That phrase makes some people’s blood run cold, but fear not. The deal in place allows the original franchise to continue on while this film is the beginning of a whole new, and separate franchise. Think of it as a Puppet Master series beamed in from an alternate universe. Last night I attended the Los Angeles premiere of PUPPET MASTER: THE LITTLEST REICH at the American Cinematheque Egyptian Theatre in Hollywood, and it pleases me to say the film is a horror fan’s dream.

The plot revolves around Edgar, a newly divorced comic book writer and artist played by Thomas Lennon, who is forced to temporally move in with his parents. While going through his deceased brother’s room he runs across a strange puppet. Research reveals it’s a collector’s item because it was made by Andre Toulon, played by the always great Udo Kier, an infamous murder killed thirty year prior. It turns out the 30th anniversary of Toulon’s death at the hands of the police and the discovery of his murders is coming up. A huge convention is planned, also containing an auction, and down on his luck Edgar decides to take a road trip to sell the puppet. Of course, evil plans have other ideas and all of the Toulon puppets come to life and wreak havoc of the convention attendees.

The script was by S. Craig Zahler (BONE TOMAKAWK and CELL BLOCK 99) was so well balanced. There were bits of pure horror woven in with character moments, and some great comedic bits, while never feeling cheesy or tongue in cheek in any way. Additionally the directing by Sonny Laguna and Tommy Wiklund was stellar. From what producer Dallas Sonnier, and co-producer Amanda Presmyk said in the post-screening Q&A this really was a labor of love from all involved with putting the film together because nearly all of them were huge fans of the original PUPPET MASTER. 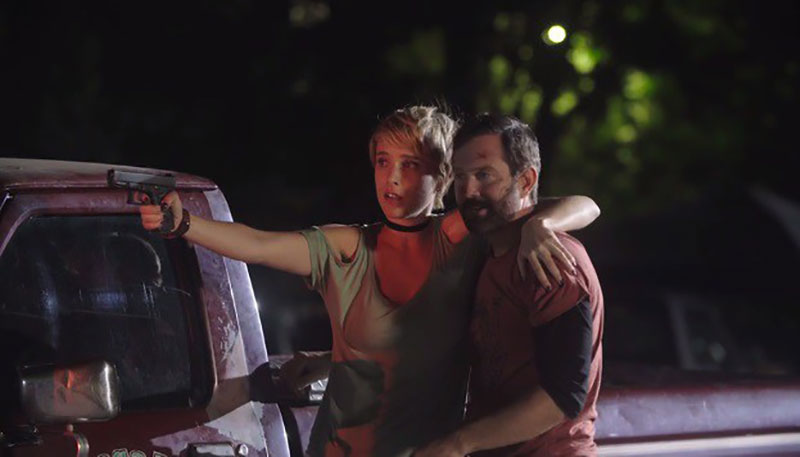 The cast was amazing across the board. Thomas Lennon played Edgar with a real world earnestness that was great to see. Jenny Pellicer as Ashely, in her first horror film role ever, nailed a perfect balance in the co-lead as Edgar’s girlfriend. She’s smart, funny, quirky, cool, and totally badass. The other main character is Markowitz, played by Nelson Franklin. He’s the wise-ass friend, and boss, of Edgar who manages to not just be a snarky punchline machine. The before mentioned Udo Kier is joined by fellow legend Barbara Crampton, playing Carol Doreski, the retired officer who helped take Andre Toulon down thirty years ago. Michael Paré, playing Detective Brown who is investigating all of the sudden murders at the convention hotel chews the scenery in the best way possible. Cuddly Bear, the scene stealing character played by Skeeta Jenkins, shows up around the mid-point of the movie and is my favorite in the film.

Tate Steinsiek, the creature and puppet designer and special effects coordinator, and his crew deserve all the praise in the world. They did an incredible job with all the practical effects and the puppet redesigns were outstanding. It really is breath taking what they were able to accomplish on a low-budget. There were two kill scenes in particular that were mind-blowing, and stuff I’ve never seen done in all my years of being a horror fan. I promise you’ll know which two I’m speaking of, and I’m positive everyone else will be talking about them once they see the movie.

This is a perfect example of a film to see with a crowd. So, either catch it at the cinema or buy it on VOD gather fellow horror loving friends and family to watch. Order some pizza, have a few beers, stock up on chips and dips and have a fun night. Watching PUPPET MASTER: THE LITTLEST REICH brought back great memories of being in middle school, renting a ton of horror movies from the local mom and pop video store and spending the weekend hanging out with friends watching them over a Friday and Saturday night. I truly enjoyed this movie, recommend it, and look forward to buying it this Friday so I can watch it again. Also, stay/watch through the credits!