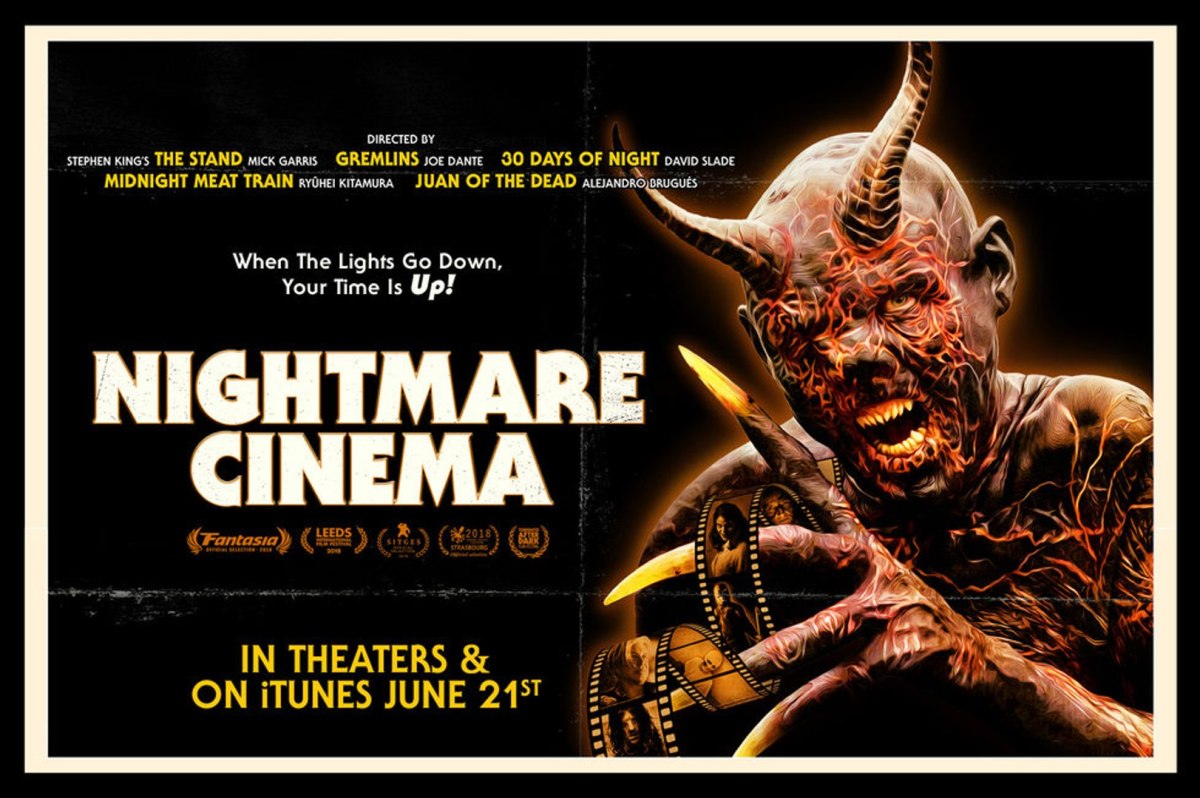 Last night I was able to attend the Los Angeles Premiere of NIGHTMARE CINEMA along with the cast, crew, and fellow horror fans. The film is a horror anthology consisting of five stories, connected by a wrap around story. I’m a sucker for a good anthology, and I’m happy to say NIGHTMARE CINEMA didn’t disappoint.

Helmed by Mick Garris (Stephen King’s THE STAND, PSYCHO IV: THE BEGINNING, MASTERS OF HORROR ), the wrap around sequences have our characters drawn into a seemingly abandoned cinema only to find The Projectionist (Micky Rourke), the “curator of a 100 years of nightmares trapped on a silver screen”, waiting to show them their very own star turn in a horrific tale. While I’ve seen some anthologies with wrap arounds that don’t always work, I found these to be well done. Micky Rourke, in a small amount of screen time, manages to be an intriguing character who I hope we see more of in the future.

“The Thing in the Woods”

This segment, written and directed by Alejandro Brugués (JUAN OF THE DEAD), was an utter delight and my personal favorite. We get thrown straight away into the climax of a slasher film featuring Samantha (Sarah Withers) as she attempts to escape “The Welder” (Eric Nelsen), a maniac bent on killing her and all her friends. I think this was the perfect beginning to the anthology, and Brugués’ script effortlessly bounces from an 80’s slasher, to a horror-comedy, and eventually into something truly creepy (and crawly). The crowd last night went wild for this one, and it set a great tone of the evening and the film.

Joe Dante (THE HOWLING, GREMLINS, TWILIGHT ZONE : THE MOVIE) gives us a throwback story in the vein of the TWILIGHT ZONE’s “Eye of the Beholder” with the second segment. Anna (Zarah Mahler) and David (Mark Grossman) are an engaged couple, not far from their wedding date, but there’s a brewing issue. Anna’s face is scarred, which makes her continuously self-conscious, but David reassures her he loves her the way she is. He quickly flips to offer her an all expense paid surgery with his mother’s plastic surgeon, Dr. Mirari (Richard Chamberlain), if it would make her happy.  Anna takes him up on this offer, and Dr. Mirari further talks her into other “minor fixes” that he can do since she’ll be in surgery anyway. Upon coming out of anesthesia things start to unravel, and Anna questions David and Dr. Mirari’s actions and motivation. The TWILIGHT ZONE is one of my favorite television series of all time, so I was thrilled with this one.

The halfway point of the anthology finds Ryûhei Kitamura (VERSUS, THE MIDNIGHT MEAT TRAIN) tacking a tale of a demon, possessed kids bent on killing, and the priest,  Father Benedict (Maurice Benard), trying to stop them. Holy buckets of blood, and flying body parts, Batman…this one gets crazy, and gory, in a big bad way. Sandra Becerril’s script was fun to watch unfold, and it was a nice cinematic palate cleanser before the final two stories. A director herself, I’d love to see Becerril do a story if we get NIGHTMARE CINEMA 2. This segment gets major bonus points for using the blood squirting equipment and severed limbs from KILL BILL and filming some scenes in the Episcopal Church of the Ascension in Sierra Madre, California. This is the same location used for John Carpenter’s THE FOG.

“This Way To Egress”

David Slade (30 DAYS OF NIGHT, HARD CANDY, episodes of BREAKING BAD, HANNIBAL, and AMERICAN GODS) turns in one of the most stunning, and heady, stories in gorgeous black and white with “This Way To Egress. Here we meet Helen  (Elizabeth Reaser) in a doctor’s waiting room with her two children. Helen’s husband recently left them, and she’s spiraling down a dark path. The longer she waits the more her surrounding become blood soaked, and the people around her become monsters. Is she losing her mind, or is she in danger of losing much more? This segment reminded me of an old TALES FROM THE DARKSIDE episode, and I look forward to revisiting it again.

The final story finds piano prodigy Riley (Faly Rakotohavan) the sole survivor of an attack on his family, recovering in a hospital with his mother and father (Annabeth Gish, Daryl C. Brown) dead. As the hospital staff slowly divulges information to Riley, during his recovery, he discovers he was dead for seventeen minutes before being resuscitated. Oh, he can also see ghosts now…and one is his mother, who isn’t thrilled about crossing over into the infinite abyss without her son. This segment felt like it would be right at home on AMAZING STORIES, a darker tale for sure, which isn’t a surprise at all given Garris’ resume.

I truly enjoyed this film, all five stories, and the wrap around segments. With each part having such a different tone, and style, I think everyone could come away with something they love with this movie. That’s one of the great things about anthologies. During the post-screening Q&A with Ryûhei Kitamura, Mick Garris, and Alejandro Brugués (Joe Dante wasn’t able to stay) it was clear how much fun these directors had filming and collaborating with the cast and crew. The low budget for the movie was mentioned several times, but every penny must have been up on the silver screen because it looked amazing.  The effects work by KNB EFX Group, and Vincent Van Dyke Effects, were top notch as well. Mick Garris teased the crowd by saying there are already discussions for a sequel, and count me among the people who would love to see that happen. NIGHTMARE CINEMA is playing in select cities, as well as available on VOD platforms, today.