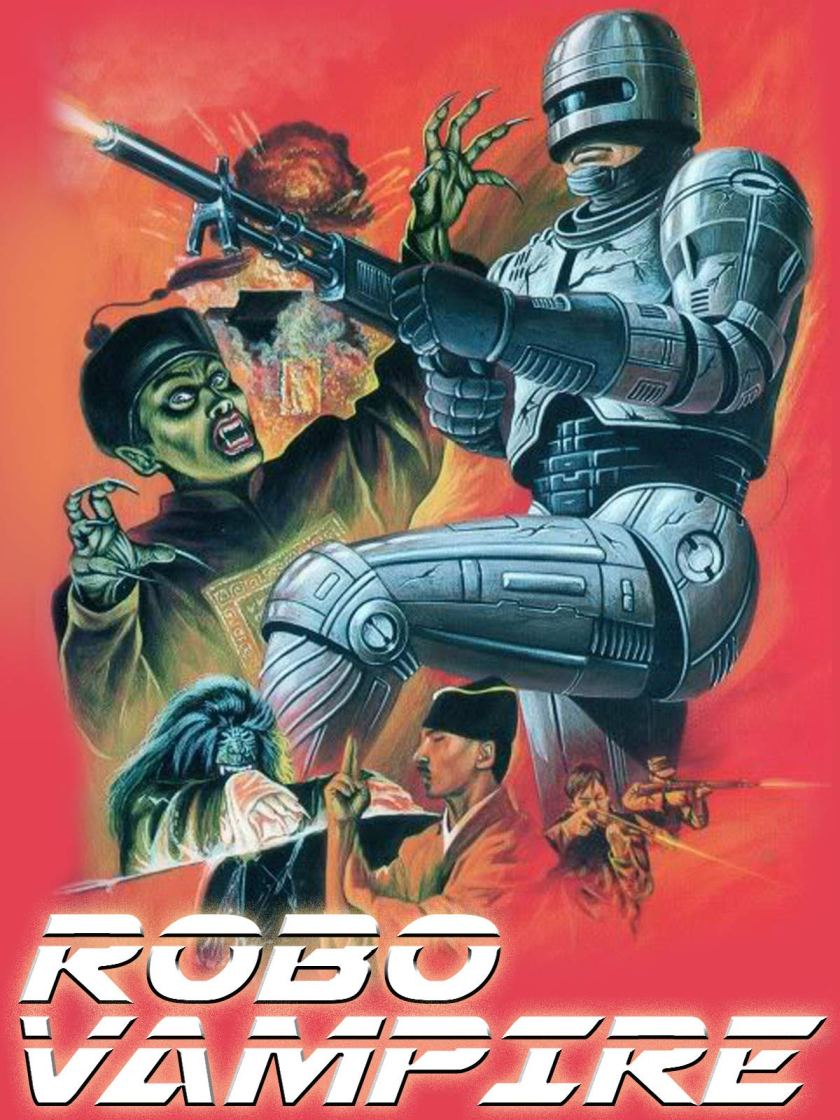 Every now and then, you come across a title in your streaming platform scrolling, and it just jumps out at you. Or in this case, hops out at you.

Godfrey Ho’s (aka Joe Livingstone) 1988 opus, Robo Vampire, just sounded like cheesy, low-budget fun, and the poster even leans into that vibe fairly hard. The core concepts of this production just make you giggle and ask, “Wait, what??”

As simply put as I can, American heroin smugglers in south east Asia get tired of the repeated run ins with “Tom, the anti-drug agent” and his team, so they hire a Daoist priest to train jiangshi (“Chinese hopping vampires”) to fight those darn anti-drug agents.

Are you still with me? Tom and most of his team are killed in their first encounter with the jiangshi. After literally 3 seconds of mourning from his commanders, one asks to use Tom’s corpse for his android experiments. Thus, Tom is resurrected as “Robo Warrior” to continue the fight against the vicious smugglers and their vampires. Keep in mind that “Robo Warrior” is one of the worst RoboCop knock offs you will ever witness. But wait! There’s more!

In an effort to counter Robo Warrior, the Daoist raises a vampire beast. Or at least a vampire in a gorilla mask. The raising of this creature is not without difficulty as its ghost witch (or witch ghost?) lover interrupts the ritual and battles the Daoist as two of the American drug smugglers stand around watching. One of strongest powers of the witch ghost (or ghost witch?) is being able to spew out a crap load of exposition in under 3 minutes.

Often, I use closed captioning just to not miss dialogue. But one of favorite things now is how the CC interprets sounds or actions on the screen. Anytime it says <squelching sounds> during a movie, I know great things are happening on screen! Robo Vampire brought a new level to the experience for me with <mystic whooshing>, <frightened groaning>, and <monstrous wailing/yelling> during the fight scene between the Daoist, the witch ghost (or ghost witch?), and the vampire beast. And just when I thought it couldn’t be topped? They dropped this cherry on my sundae: <intense mystic whooshing>!

Now’s when we cut to the story of Ray being recruited by Chief Thompson to go and rescue Sophie the spy a group of gangsters and smugglers that captured her. And by “cut to,” I mean cut nearly an hour’s worth of footage from the 1984 Thai film Paa Lohgan into this one for all of the gang war and spy story stuff. Keyways to tell which is Paa Lohgan versus Robo Vampire when key characters aren’t on screen? Besides the visual difference in color grading of the film, all the Thai footage uses real guns with blanks. All the Chinese footage uses these weird barrel attachments that contain 5-6 firecrackers (that you can often see) that fire off in quick sequence.

There are a couple scenes of old school “Chinese water torture” under a dripping faucet for Sophie that feel almost quaint now when you think of waterboarding. But it seems to work on her! Ray and Wendy face the same torture later with the same results.  But let’s get back to Robo Warrior and the hopping vampires.

A scene that I’ve found the most GIF worth, the jiangshi encircle Robo Warrior on a beach. Immune to most of his bullets, he goes hand to hand for a brief bit with limited results. He then summons his machine gun back into his hand like it’s fricking Mjolnir! This happens at least two other times in the movie, as well as his gun suddenly being able to shoot a rope of flames. Seriously. It’s a flaming rope strapped to the end of the gun!

This movie was just bad in so many ways, from the acting, the dubbing, the effects, and beyond. Man was it fun to watch! The only part I found a bit objectional was a scene out of nowhere that had a woman cutting open the belly of a cow or oxen to stuff several bags of heroin in and sew it back up. Outside of that, Robo Vampire is just straight up laughable. Even the closed captioning made me laugh.

Kick back with a beverage of choice, some snacks, and a few friends (however social distancing permits), and just have a good laugh with this one. Heaven knows we can use a laugh or three right now.