My father is the King of horror B-film lovers so I wasn’t shocked when he told me on the morning of September 14th, 1991, “I caught part of a movie called ‘Sorority Babes in the Bowl-O-Rama of Death’ last night, let’s head to the video store to rent it later today.” How do I know the exact date? Because what he caught was part of an UP ALL NIGHT with Rhonda Shear episode that aired Friday the 13th, on the USA Network, featuring MEATBALLS III and SORORITY BABES IN THE SLIMEBALL BOWL-O-RAMA.

So, instead of discovering that hidden horror gem in the video store as we roamed the aisles, we began a trek to find this supposed cinematic horror masterpiece like it was The Holy Grail. Our stops at the video stores near us (this was the era where mom and pop shops still thrived alongside chain video stores, so we made many stops) proved unsuccessful. None of them had it on the shelf, and inquiries with the staff resulted in blank stares and “I’ve never heard of it before” replies. Dejected, but refusing to quit, we returned home where I was tasked with cracking open the phone book to call other video stores in the area.

Lucky for us an employee at a place I contacted looked the movie up in their VHS catalog, because he thought it “sounded cool.” Thankfully this is where the clerk gave me the correct title for the film, but followed that revelation up with bad news. They didn’t have it, although they could order it for us, BUT we’d have to pay roughly $80.00 for them to buy the VHS tape from their supplier. Surprisingly, usually not one with impulse buying control, my dad declined the offer. Armed with the actual title of the film I did hit pay dirt a few calls later at a mom and pop shop forty minutes away from us. Not only did they have the film, the tape was in, and they agreed to hold it for us.

Finally, back home with our VHS treasure, my pops and I settled in to view the David DeCoteau directed, and Sergei Hasenecz written (their only feature film writing credit), horror movie. It begins with three sad sacks, Calvin (Andras Jones), Jimmie (Hal Havins), and Keith (John Stewart Wilman) deciding to spy on the Tri-Delta sorority’s initiation ceremony. 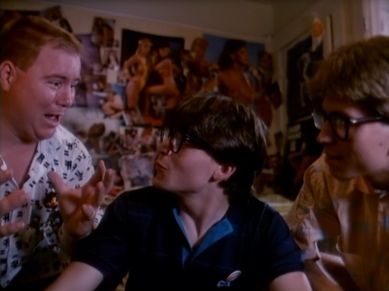 Tri-Delta members Babs (Robin Stille), Rhonda (Kathi O’Brech), and Frankie (Carla Baron) haze sorority pledges Taffy (Brinke Stevens) and Lisa (Michelle Bauer) by having them strip down, and lean over the couch for spankings with the sorority house paddle. This is followed by a little whipped cream action which, OF COURSE, leads to Taffy and Lisa needing a shower. The guys decide to sneak into the sorority house, adding breaking and entering to their “Peeping Tom” resume, to watch the ladies showering only to get caught in the act by the Tri-Deltas.

As punishment (I guess?) Babs sends Calvin, Jimmie, and Keith with Taffy and Lisa on the final part of their initiation, breaking into the mall bowling alley to retrieve a bowling trophy. Bab’s father runs the mall so the Tri-Deltas are able to watch the heist attempt from monitors in the mall security office. The group successfully breaks in, only to find bad-ass biker chick, Spider (Linnea Quigley), already robbing the place. After some tense moments Spider helps them break into the trophy room, they retrieve their prize, and then all Hell breaks loose as the trophy is accidentally dropped…releasing an Imp (a puppet voiced by Michael David Sonye, better known as Dukey Flyswatter of the L.A. horror punk band Haunted Garage) who was trapped inside.

The Imp, looking like the love child of Shrek and Donkey, offers to grant everyone present a wish. Naturally there’s a catch as we enter “be careful what you wish for” territory. In quick secession all the wishes begin to go wrong, some of the group are turned into “Uncle Impie’s” demon minions, and others are dispatched in various ways around the bowling alley until the climatic, final battle against the Imp concludes. I’m being vague, and super “wrap up-ity” here, as to not spoil the fun for any potential first time viewers.

Was this the VHS gold at the end of the video store rainbow my dad made it out to be? Debatable, to be sure, but sixteen-year-old me enjoyed it for the horror sleaze that it was. Forty five-year-old me, watching again last week for the first time since that September day in 1991, sure sees it as a trashy, horror nostalgia trip best enjoyed with fellow horror-loving  friends/family and COPIOUS amounts of beer and pizza. Besides, you can’t go wrong with the awesomeness that is Linnea Quigley. There’s a reason the episode of UP ALL NIGHT my father happened upon that Friday the 13th almost three decades ago is a fan favorite of the series.

Now, if you’re from the UK, you may be thinking this sounds exactly like a movie you’ve seen before, but it wasn’t called SORORITY BABES IN THE SILMEBALL BOWL-O-RAMA. That’s because it was released on video there under another title…THE IMP. I have to say I prefer the US title. I mean, yes, it’s a mouthful but it lays everything out on front street. This movie is exactly what it sounds like…pure 80’s, low-budget, T&A horror cheese. If that’s in your Film-watching wheelhouse, then dive on in with the rest of us slimeballs. 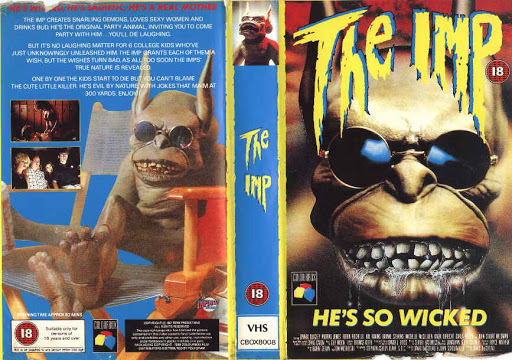