Written and Directed by Ari Aster 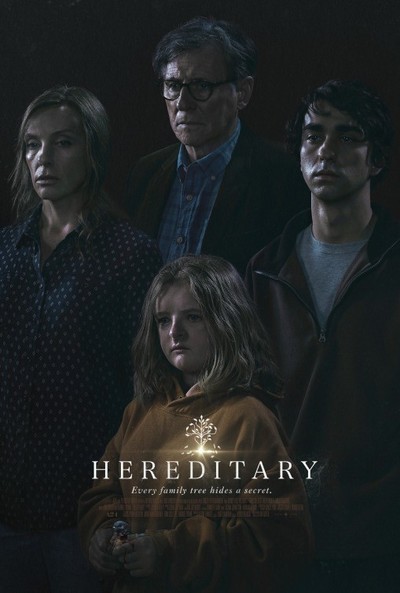 Have you ever been in your bed at night, and were suddenly convinced someone, or something!, was lurking in the darkness just waiting for the perfect moment to get you? Those moments where you hear noises behind you and your imagination runs wild with what it could be. Those goose-bump causing, adrenaline pumping seconds between thinking you see something in the corner of your room and realizing it’s the pile of laundry you put in your chair. Those terrifying occasions where your fear causes your heart to beat so loudly you think it can be heard from the other side of the house, and your mouth goes dry just as that bone-chilling tingle radiates throughout your entire body…that’s what HEREDITARY was for me.

In his first feature film, writer-director Ari Aster has crafted a horror movie that stands shoulder to shoulder with recent genre entries like THE BABADOOK, THE WITCH, and IT COMES AT NIGHT. The movie tells the story of the Graham family hurtling into a downward spiral after the death of their matriarch. That is all of the plot I’ll mention in this review, as this is a film best seen with as little information as you possibly can. I’d managed to avoid the majority of the hype surrounding its festival screenings, and all reviews prior to seeing it last Thursday night. I’m thrilled I went in without any real knowledge, or expectations, about the movie.

Aster is masterful as a writer-director here, and anything he does going forward will be on my radar. HEREDITARY is a slow burn family drama built on bleak tension, creepy moments, and oppressive dread. It won’t be for everyone, but people who love that type of horror should be thrilled. The movie doesn’t rely on jump scares, instead giving the viewer a plethora of creepy scenes that the camera lingers on. You don’t get quick edits where you’re on to the next thing here. No, Aster makes you wallow in the moment, he draws you into the film, and you experience the events along with the characters. It’s been a while since a movie has gotten under my skin, and into my brain, like this one has.

Speaking of the look of the film, Cinematographer Pawel Pogorzelski has put together a beautiful movie. Much of it takes place at night, and there’s many moments of something just being on the cusp of coming out of the darkness that’s done amazingly. The way the shots are framed just draws you in, and you can’t help but feel terror for the characters involved. The production design by Grace Yun, art direction by Richard T. Olson and the work of art department, and set decoration by Brian Lives are all glorious as well. They had to build the house that’s in the film from scratch, and the fantastic job they did shines through in every frame.

Colin Stetson’s score was nearly a character all on its own. It’s stunning, haunting, and used perfectly throughout the movie. The score combined with the sound design helps push you into that dreadful, creepy feeling for nearly the entirety of the film’s run time. I know A QUIET PLACE, deservedly, gets praise for its sound design, but I think HEREDITRY is neck and neck with that movie. If you see it at the cinema, grab a seat in the middle-middle of the auditorium and let the sounds envelope you as the horror unfolds before you.

Finally, I have to talk about the cast led by the brilliant Toni Collette, as Annie. There’s been chatter about her getting an Academy Award nomination for Best Actress for her work here. I’m hopeful what GET OUT did at the Oscars last year will leave that door open for her this year. She’s utterly impressive and amazing in this role. Right there with her for me was Alex Wolff, playing her son Peter. I wasn’t familiar with him before seeing HEREDITARY but he does incredible work here. He does some seriously emotional heavy lifting in the role. Rounding out the family is Milly Shapiro, as the quirky and creepy daughter, Charlie, and Gabriel Byrne as the husband and father, Steve. Shaprio immediately enters the list of all-time creep kids in horror movies for me. What she can do with just a sound, a facial expression, or a body movement is impressive in building her character. While Byrne doesn’t get some of the meaty moments, he deftly handles the role of the family member trying to hold everything together as he watches it slip through his fingers.

As with all horror, this is super subjective. What I find terrifying, creepy, and nightmare inducing you may fund dull and boring. Earlier in this review I mentioned THE BABADOOK, THE WITCH, and IT COMES AT NIGHT. If you were a fan of any of those movies I think HEREDITARY might be your bag too. For me, this has become my favorite film at the near halfway point of 2018 and I can’t wait to see it again.