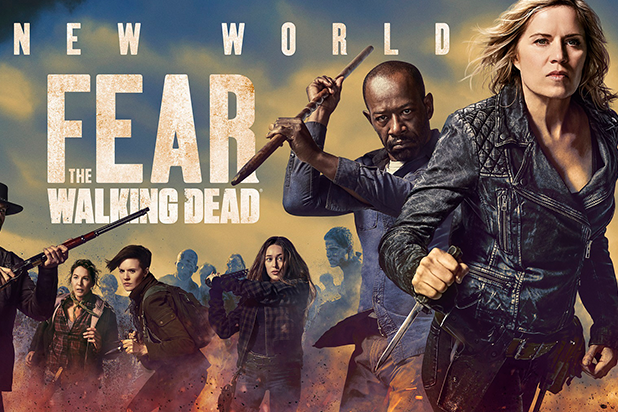 I admit I was seriously skeptical about the “crossover” with THE WALKING DEAD and FEAR THE WALKING DEAD when it was first announced. I couldn’t wrap my head around how they were going to make it work. Thankfully, any and all doubts I had about the event have been entirely erased. The new showrunners, Andrew Chambliss and Ian B. Goldberg, have course corrected the series with Season 4A of FEAR THE WALKING DEAD in a big bad way.

The start of Season 4 had us time jumping all the way to events after the Season 8 finale of THE WALKING DEAD, as Morgan (Lennie James) decides enough is enough with Rick Grimes and Company and he begins a trek out west. I’m actually glad they chose Lennie James to move to FEAR THE WALKING DEAD, because he’s such a great actor and Morgan deserves more of the spotlight than he was getting on AMC’s flagship zombie series.

Along the way we meet the rest of the new characters for this year. John Dorie (Garret Dillahunt) has immediately become my favorite character in the Walking Deadverse. His sweet, odd, retired police officer, and sharpshooter worked his way into my heart from his first scene. I’m really enjoying Maggie Grace’s Al, short for Althea, as well. Having her act as a journalist, documenting the stories of people she comes across, was the perfect way to find out what happened to the core cast from the end of season 3, as well as information on some of our newcomers. Thankfully, Al is much more than just a plot device character. Topping off our new characters is the mysterious June (a.k.a. Naomi, a.k.a. Laura), played by Jenna Elfman, who ends up being a major player in the show’s new direction.

Eventually John Dorie, Al, and Morgan run into the old guard of Alicia Clark (Alycia Debnam-Carey), Victor Strand (Colman Domingo), Luciana Galvez (Danay García), and Nick Clark (Frank Dillane) all looking worse for wear. I enjoyed the interactions between the two groups, and this is where the season really kicks off. We have several different plot threads running across two timelines for this first half of the season. We find out John Dorie is looking for the love of his life, who up and left him one day. Over the course of several episodes we get more information on “Naomi”/”Laura”/June, and find out she’s the one John Dorie’s been looking for. Alicia, Victor, Luciana, and Nick’s journey from the end of season 3 until now gets teased out through the entirety of season 4A, with the culmination of the story ending at the close of the mid-season finale.

Over the course of the first eight episode, we lose two major characters who’ve been with us since the start of the series. The first to meet his end is Nick Clark. Now, I wasn’t the biggest fan of this character at the beginning, but I grew to really enjoy him on the series. I was unaware that Frank Dillane had requested to be written out of the show, so Nick’s death was a total shock to me. His exit really reminded me of Tyrese’s good-bye seasons ago in THE WALKING DEAD. While it was alluded to over the course of these eight episodes, the fate of Madison Clark (Kim Dickens) was held until the mid-season finale. I don’t think it was a shock to anyone that Madison was dead with the way the older group were acting, and the fact she was only seen in the flashback plot. Unlike Dillane, Kim Dickens did not ask to leave the show as it’s been revealed the new showrunners made the call to shake things up.

I know both of these deaths have angered some longtime fans, but I welcomed them. It truly does show that on FEAR THE WALKING DEAD everyone truly is in danger. Now I want to tune in every week because I’m unsure of what will happen next. This has sorely been lacking in THE WALKING DEAD for some time, and I hope they take a page from this series when they return for season 9 at the end of the year. As for FEAR THE WALKING DEAD, this is now “must see TV” for me, and I can’t wait for the mid-season premiere for episode 9 on August 12th, 2018.