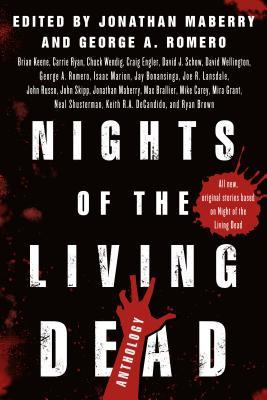 Anthologies, be they in book or film form, have always been one of my favorite things when it comes to horror. So, it’s no surprise to me that I did enjoy 2017’s “Nights of The Living Dead: An Anthology” by George A. Romero and Jonathan Maberry. What did surprise me was the through and through quality of the stories gathered into this collection! Usually you’ll have one or two stories that fall a little flat or just aren’t to your taste. Well, for my taste, all nineteen tales hit the mark in evoking a response in me. Some made me laugh, other gave me chills, and one even filled me with a sense of revulsion that had me gagging at the visceral descriptions given.

The linking thread to this collection is that all of the stories take place on or very near the beginning of the living dead outbreak portrayed in the cinematic classic, Night of the Living Dead. Some are set are the same time as the film, others just before, and a select few even look at the aftermath of that night. All of the stories do hold true to the rules of the NoTLD universe as we know them and remain grounded within it.  My only real complaint is that there are some anachronistic moments in a few stories that took me out of the 1968 setting (one mentions a cell phone), but others are clearly set in a date just beyond the 60’s and 70’s, maybe even at the time of Tom Savini’s remake in 1990. I admit that it’s a minor nit to pick, but it was there. Otherwise I can’t say anything bad against this anthology.

Check out the impressive list of authors that contributed and my own blurb about each story:

Now I did listen to the audiobook versus reading it (I had a 7 hour round trip car ride to take a chunk out of it), and a couple of the stories lend themselves well to the audio format, specifically “Orbital Decay” and “Live and On the Scene.” Another treat with the audiobook is having “Dead Man’s Curve” be read by Kasey Lansdale, a musician and author in her own right and Joe R. Lansdale’s daughter.

Whichever format you choose to get of the anthology, just get it! This collection is a must for any fans of the zombie genre, especially if you are a die-hard fan of the universe George A. Romero and John A. Russo created over 50 years ago. You can tell each of the authors that contributed to this have a true love of this world, too.